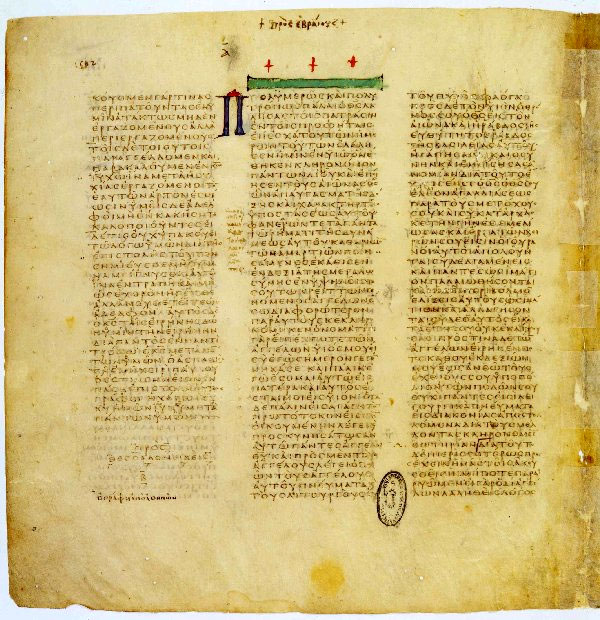 The Bible is a very old book – its last books were written 2,000 years ago, long before the invention of printing.  For centuries it was copied by hand, and the original manuscripts have long since disappeared.  But if we no longer have the original manuscripts, how do we know what they said?  How can we tell how accurate the Bibles we have today are?  The art of reconstructing the original text is known as “textual criticism,” and it can be both complicated and controversial.

During the long centuries that the biblical manuscripts were copied by hand, variations would appear in the text.  These are called “variant readings.”  The trick is to determine which of the variant readings represent the original text.

In the Old Testament this has not been a large problem.  There is a standard Hebrew text, called the “Masoretic Text,” which has been faithfully preserved for centuries.  It forms the basis for most modern translations of the Old Testament.

Determining the text of the New Testament, however, is a little more complicated and difficult.  The first published, printed edition of the Greek New Testament appeared in 1516.  It was the work of the famous Dutch humanist Desiderius Erasmus.  It was based on a relatively small number of manuscripts, some of which were in the monastic library at Basel, Switzerland.  Erasmus’ text underwent several subsequent revisions.  Eventually it became known as the “Textus Receptus” (the “received text”) and was the basis for the King James translation of the Bible in 1611.

The Textus Receptus roughly conforms to, but does not exactly represent, the standard text found in the majority of Greek manuscripts.  This is sometimes called the “Byzantine,” “Koine,” or “Majority” text (or “das Reichstextum,” if you are a real German!)  In 1881 however, two British scholars, B.F. Westcott and F.J.A. Hort, published their edition of the Greek New Testament.  The Westcott and Hort edition marked a significant departure from venerated Textus Receptus.

Westcott and Hort argued that not all manuscripts should be accorded equal weight.  Rather, the weight attached to any individual manuscript should be based on its origin and its relationship to other groups of manuscripts.  The basic principle is, in itself, sound enough.  The problem is with the way that Westcott and Hort applied it. They tried to group together manuscripts and trace their genealogy, but in doing so they relied much too heavily on pure speculation.

The Westcott and Hort text was used as the basis for the Revised Version of 1881 and the American Standard Version of 1901.  And Westcott and Hort’s methods have been used since then in more recent editions of the Greek New Testament, including those by Eberhard Nestle and the United Bible Societies.  These editions, in turn, have formed the basis for most modern translations of the New Testament.

Most modern textual critics try to group the surviving manuscripts into “families.”  The Byzantine Text represents one such family.  Most of the older manuscripts presumably fall into the Alexandrian, Caesarean and Western families.  The Alexandrian text is fairly well defined and documented.  It is represented by the two manuscripts mentioned earlier (Codex Vaticanus and Codex Sinaiticus) as well as a fairly large number of very old papyrus manuscripts found in Egypt.  The other two “families,” however, are highly problematic.  The evidence for their existence is highly conjectural.  There are few, if any, manuscripts that perfectly represent either of them.

The textual critics then look at these various older manuscripts and try to piece together what they think the original text looked like.  This, too, is highly conjectural.  For example, one commonly used rule of the thumb is that “the more difficult reading is to be preferred.”  The assumption here is that a later copyist is more likely to alter a reading if he thought that the reading did not make much sense.  Therefore, the reasoning goes, the reading that doesn’t make much sense must have been the original one.  But there are two underlying assumptions here: 1) the original text was rife with errors, and 2) later copyists felt free to make changes to the text.  Neither assumption is likely to be true.

I would suggest that a more sensible approach would be to go by what we actually know about individual manuscripts and versions, and weigh them accordingly.  So, to begin with, what do we know about the Byzantine Text?  We know that it was the text used by St. John Chrysostom, who was the bishop of Constantinople from A.D. 398 to 403.  But where did Chrysostom get it?  Most modern textual critics assume that he brought it with him from Antioch, and that it can be trace back to a revision by Lucian of that city.  But I would contend that a more likely explanation is at hand.  We know that around A.D. 331, when the Emperor Constantine was building two new churches in his new capital city of Constantinople, he asked one of the greatest biblical scholars of his day, Eusebius of Caesarea, to prepare for him fifty copies of the Greek Bible.  Eusebius had access to the library of one of his predecessors, Pamphilius of Caesarea, who lived during the later years of the Third Century.  Pamphilius’ library had one of the best collections of Bibles available at the time.

We also have some interesting information about Codex Vaticanus.  As mentioned above, it bears a close resemblance to a number of older papyrus manuscripts found in Egypt.  This suggests that it is a very good representative of the “Alexandrian” or “Egyptian” type of text.  But how did it manage to get into the Vatican Library in Rome?  Here again there is an interesting circumstance.  The books of the New Testament are arranged in the manuscript in the same order as suggested by St. Athanasius, and we know that Athanasius spend some time in exile in Rome in A.D. 340.  Since that is about how old most scholars think that the manuscript is, it is tempting to think that Athanasius himself may have presented the manuscript to the Emperor Constans.

The Latin Vulgate, we know, was produced by St. Jerome between A.D. 382 and 388, and it became the standard Latin version of the Bible.

Codex Bezae, on the other hand (designated by the letter “D,” and cited by modern scholars as one of the chief witnesses for the “Western” text) contains many idiosyncratic readings, and may have originated in southern France, an area where the Albigensian heresy was rife.  It can hardly be considered a reliable witness to the original text.

Our conclusion, then, is this: the Byzantine Text, should be given the benefit of the doubt wherever possible.  Readings from Codex Vaticanus and the Latin Vulgate should be given serious consideration.  Most of the other “findings” of modern textual criticism should be taken with a grain of salt.  The problem with most modern textual criticism is that the critics are in the position of second guessing the work of such ancient church fathers as Eusebius, Athanasius and Jerome.  But the church fathers were competent scholars and had access to better manuscripts than are available today.  Shouldn’t their work be given preference?