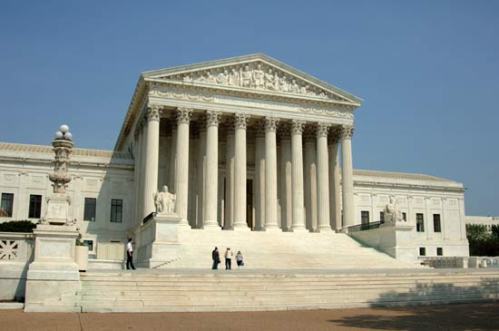 This past week the Senate Judiciary Committee held confirmation hearings on Supreme Court nominee Brett Kavanaugh.  As was expected the subject of Roe v. Wade, the Supreme Court’s landmark decision on abortion, came up for discussion, and as expected, the nominee was non-committal.  At one point in the discussion Sen. Dianne Feinstein asked Judge Kavanaugh, “What would you say your position today is on a woman’s right to choose?,” to which he replied, “As a judge, it is an important precedent of the Supreme Court.”

Judge Kavanaugh was right to be non-committal on the subject.  Strictly speaking the proper role of a judge is not to make law based on his own personal preferences, but to decide cases based on existing law.  But it is for precisely that reason that Roe v. Wade was extremely problematical.  It was marked by a strained, if not to say bizarre exegesis of the Constitution, and it led to a morally outrageous conclusion.

In Roe the Court took up the question of the constitutionality of state anti-abortion laws.  The case basically involved two separate questions: 1) Is the life of an unborn child protected by the Fourteenth Amendment?   And 2) Does a woman have a right to privacy which includes the right to have an abortion?  What makes the decision so bizarre is that the justices took two completely different approaches to answer the two questions.  On the first question they took a very narrow, legalistic interpretation, while on the second question they let their imaginations have free rein.  One cannot help but wonder if the outcome was dogmatically contrived.

On the first question, Mr. Justice Blackmun, writing for the majority, argued that the word “person,” as used in the Constitution, does not include an unborn child, and therefore the unborn child’s life is not covered by the Due Process clause of the Fourteenth Amendment.  On the second question, however, Mr. Justice Blackmun professed to see a generalized right of privacy, something which he himself admitted was not explicitly mentioned anywhere in the document, but thought might be implied in any one of a number of different provisions.  But whatever it was and wherever it was, Justice Blackmun was sure that it must include the right to have an abortion.

In a sense, we do hope that the Constitution does at least imply a right to privacy.  But the right to privacy does not include the right to commit a crime.  You do not have the right to murder your mother-in-law in the privacy of your own home.  The right of privacy, rather, protects you against unreasonable searches and seizures.

What is morally outrageous about the decision is the implication that there is no longer a sanctity of human life.  Mr. Justice Blackmun asserted that “we need not resolve the difficult question of when life begins,” and then went on to argue that Texas may not, “by adopting one theory of life,” override the rights of a pregnant woman.  Thus he tacitly admitted the possibility that life might begin at conception, but argued that it does not matter if it does.  The unborn child still does not have a right to life.

What the Bible says about the ancient Canaanites is highly instructive in this regard.  One of the evils that was endemic in Canaanite society was the worship of a pagan deity named Molech.  Molech was an ancient Canaanite god whose worship involved human sacrifice, specifically the sacrifice of children who were made to pass through a fire.  What God told Israel about the practice was instructive.

First of all, the practice had the effect of polluting or defiling the land.  When Cain slew Abel God said to him: “The voice of your brother’s blood cries out to Me from the ground.  So now you are cursed from the earth, which has opened its mouth to receive your brother’s blood from your hand” (Gen. 4:10,11; NKJV).  And so it was with regard to the Canaanites.  “For the land is defiled; therefore I visit the punishment of its iniquity upon it, and the land vomits out its inhabitants” (Lev. 18:25).

Secondly, this and other like practices are called “abominations” (vv. 26,27,29,30).  An “abomination” is something that God considers loathsome or detestable.  Nowadays we might say that it “grosses you out.”  It is an offense that is particularly serious.

Child sacrifice is a barbaric and inhumane practice, something that runs counter to the natural sympathy that should exist between a parent and a child.  God made it clear that Israel was to live a different standard.  Leviticus 19, which falls right in the middle of God’s indictment of the Canaanites, contains exhortations to regard the poor, the deaf, the blind, the elderly and the foreigner.  In a word, “You shall love your neighbor as yourself” (Lev. 19:18).

The fate of the Canaanites raises some disturbing questions about the possible fate of America.  If God regards abortion as a moral outrage, and if our destiny is ultimately in His hands, then the future looks ominous indeed.  All around one sees signs of impending doom: mired in foreign wars, sinking beneath a mountain of debt, the crumbling family structure, even the erratic weather and invasive species, the divisive politics of the day, we give every appearance of being a civilization in decline.  Could it be that God is telling us something?  Could it be that God’s judgment is not far away?