THE CHURCH AND THE LGBT ISSUE

Last week the United Methodist Church voted to uphold the church’s traditional ban on same-sex marriages and LGBT ordinations.  The denomination is said to be deeply divided over the issue, and many of its more liberal members are likely to leave over it.  “I will not participate in your bigotry, sin & violence,” tweeted one liberal pastor, while a conservative delegate from Liberia in Africa said “We can’t do anything but to support the Traditional Plan – it is the biblical plan.”

The delegate from Liberia is correct – the “Traditional Plan,” (the resolution upholding the bans on same sex marriage and LGBT ordination) is in fact, the biblical plan.  The Bible clearly condemns homosexual behavior.  The problem, we fear, is that the mainline Protestant denominations have long since abandoned the authority of Scripture, and in the process have lost sight of the biblical concepts of sin and redemption.  Yes, God did so love the world.  But that does not mean that He simply accepts us as we are, sin and all.  “But God demonstrates His own love toward us, in that while we were still sinners, Christ died for us” (Rom. 5:8; NKJV).  God’s plan and purpose is not to accept us in our sin, but to save us from our sin.  “Do you not know that the unrighteous will not inherit the kingdom of God?  Do not be deceived. Neither fornicators, nor idolaters, nor adulterers, nor homosexuals, nor sodomites, nor thieves, nor covetous, nor drunkards, nor revilers, nor extortioners will inherit the kingdom of God.  And such were some of you.  But you were washed, but you were sanctified, but you were justified in the name of the Lord Jesus and by the Spirit of our God” (I Cor. 6:9-11).

But what exactly is it that makes homosexuality sinful?  It should be noted that homosexuality is, in fact, a moral and not a biological issue.  Unlike race, which is purely physical and biological, a person’s sexual activity is a matter of behavior and choice.  While we may feel a strong physical urge in one direction or another, as thinking, rational human beings we can discern between right and wrong and make morally responsible choices.  This is why our sexual behavior falls under the purview of the 7th Commandment: “Thou shalt con commit adultery.”  We may feel an urge or a desire, but whether or not we act on it is a decision we consciously make.  Thus homosexual activity becomes a matter of morality and ethics.

Human sexuality is something that was created by God, and it has a specific, God-ordained purpose.  The primary purpose of sex is heterosexual reproduction, and the primary purpose of marriage is to create a stable home environment in which to raise children.  Anything other than a permanent heterosexual relationship within the bond of marriage, or complete celibacy, is a deviation from the norm and is therefore consistently condemned in Scripture.  This includes fornication (sex before marriage), adultery, pornography, prostitution, and divorce, as well as the grosser forms of sexual activity.

The Bible portrays homosexuality as a sign of advanced decadence.  In Rom. 1:18-32 the apostle Paul traces the course of social disintegration.  Significantly homosexuality is said to be a consequence of religious apostasy, and it represents a judicial act on God’s part: “Therefore God also gave them up to uncleanness . . .” (v. 24).  “For this reason God gave them up to vile passions . . .” (v. 26).  It is also significant that homosexuality is described as an expression of extreme lust.  It is marked by “the lusts of their hearts” (v. 24) and “vile passions,” and male homosexuals are said to “burn in their lust for one another” (v. 27).  It is a picture of men enslaved to their uncontrolled lusts – hardly a noble and uplifting scene.

The transgender issue raises other questions.  Can a person change his gender?  Can he be “gender non-conforming”?  Gender is something that is biological – it is written into our chromosomes, and ultimately determined by God himself.  “So God created man in His own image; in the image of God He created him; male and female He created them” (Gen. 1:27).  How, then, did we get the idea that we can change our gender?  Is it not because of an underlying philosophical assumption that we exist as autonomous beings, not accountable to any Creator?  But what if God actually does exist?  Are we not then engaged in a colossal act of self-delusion?  The plain fact of the matter is that human society functions on a male – female dynamic, and indeed has to in order to survive.  If we try to deny the existence of gender roles, and try to deny our own biological gender, all we have done is to create dysfunctional relationships with our fellow human beings.  And if we try to raise our children in a gender non-conforming way, we have probably made it difficult for them to achieve happy, well-adjusted lives as adults.  How will they ever make marriage work, and raise children of their own?  Where is the compassion in that?

The United Methodist Church is likely to split over the issue.  But what the liberals need to understand is that we live in a rationally ordered universe created by an intelligent Supreme Being, and that everything in the created world has a divinely ordained purpose.  The human race, on the other hand, is in a state of sin and rebellion against God, and has twisted and perverted the things that God had originally created for a good and noble purpose.  Human sexual love is one of the things that God has created, but we have perverted it to serve our own selfish lusts.  And the end result is pain and misery for all – wrecked relationships and children growing up in unstable, poverty-stricken single-parent households.  In the end no one wins in a climate of sexual license.

What the liberal, mainstream denominations have done, in effect, is to ignore what God has revealed in Scripture and invented their own standards of morality.  What usually happens in actual practice is that they end up conforming to standards of the surrounding culture which is increasingly secular (i.e., implicitly atheistic) and licentious.  The end result is to lose anything like a distinctively Christian testimony to the world.

The just and humane thing to do, the compassionate thing to do, is to uphold the institution of marriage as God originally intended it to be – a permanent, binding and loving relationship between one man and one woman.  We hope and pray, for the sake of American society as a whole, that the United Methodist Church will return to biblical standards of morality and once again preach the Christian gospel once so forcibly proclaimed by John and Charles Wesley. 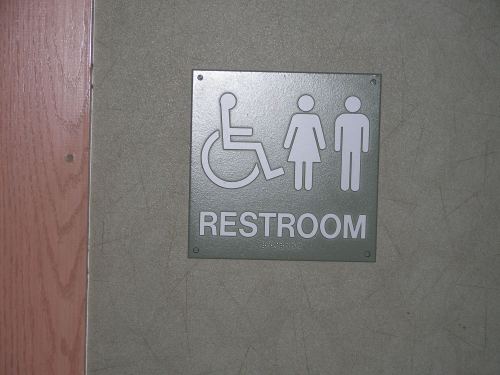 Here we are, in the midst of a presidential election cycle, and what should become one of the most hotly debated issues of the day, but who should be allowed to use which restroom?  The State of North Carolina recently passed a law requiring individuals to use the public restroom that corresponds to the gender listed on their birth certificates.  The Obama administration responded by threatening to cut off all federal aid to North Carolina.  At the same time the administration sent out a directive to school districts all over the country on how to avoid discrimination against transgender people.

It should be noted that the policy adopted by North Carolina is perfectly reasonable.  If we understand things correctly, individuals in North Carolina who undergo sex reassignment surgery can have their birth certificates changed to reflect their new gender identities.  And in the case of a public restroom there has to be a means of identifying a person’s gender.  To allow anyone to use any restroom he pleases is to defeat the whole purpose of having separate restrooms.  It especially puts women at risk of becoming victims of voyeurism.

Contrary to the way the issue is often portrayed in the press, it is not a simple matter of some people identifying with one gender or the other.  Gender Identity Disorder is just one in a whole range of sexual behaviors.  Some people are homosexuals; some are bisexual.  Some are transvestites; some engage in sadomasochism.  There are even some persons who identify as “trans” who are still attracted to the opposite biological sex.  How, then, does one identify a person as one gender or the other?  Where does one draw the line?

There is, of course, a formal psychological definition of “Gender Identity Disorder.”  But once the diagnosis has been made what is the most appropriate treatment?  Logically one could go either one of two ways: either change the body to conform to the mind or change the mind to conform to the body.  The approach favored by the LGBT community is the former: undergo hormone treatment or even sex reassignment surgery to make the body conform more closely to the person’s psychological identity.  But surgery cannot make the person a perfect specimen of the opposite sex: some of the old features are bound to remain.  This puts the transgender person in an even more awkward position: he does not conform entirely to either gender.  He is neither truly male nor female.

But an even deeper problem remains: what caused the gender identity disorder in the first place?  There is no hard evidence that the underlying cause is biological or hereditary.  Rather the available evidence seems to suggest problems in early childhood socialization.  And if that is the case surgery is unlikely to cure the underlying problem, and will leave the “trans” as frustrated as ever.  Is this really a wise or humane way to handle the situation?

Why, then, would we attempt surgery?  Part of the problem is that modern secular psychology does not have a clearly defined value system, and thus has difficulty defining social norms.  Psychiatrists are inclined to think in terms of the patient’s own inward sense of well-being.  Since most people do not want to change the way they think, the therapists tries to find a way to change or cope with circumstances.  In the case of a “trans” person that means transitioning to the opposite sex, enabling the person to live out his fantasy.

But most likely there is a philosophical agenda here as well – the idea, borrowed from Existentialism, that we exist as autonomous individuals and that we should be free to define our own “essence” or identity (“existence precedes essence”).  Seen from that perspective social norms are artificial and oppressive.  This perspective was taken up by the Feminist movement and from there spread to the LGBT community.  It is no longer a matter of “fitting in”; rather it is a matter of “being accepted.”  Hence the calls for “diversity” and “inclusiveness.”

The underlying premise is atheism – that there is no such thing as Intelligent Design, that we live in a meaningless, purposeless universe, and thus are free to define ourselves any way we please.  But this creates a huge problem for society as a whole.  If each individual is free to define himself any way he wishes, and should not be required to any particular gender role, who will assume the duties and responsibilities of marriage and parenthood?  Marriage, by its very nature, is confining and demands self-sacrifice.  And marriage is the very foundation of society.  Without it there is no stable environment in which children can grow and mature.  Human society as a whole depends on the interaction between the sexes, and society simply cannot function in the absence of standards and norms of some kind.

“So God created man in His own image; in the image of God He created him; male and female He created them” (Gen. 1:27; NKJV).  We do not, in fact, live in a meaningless, purposeless universe – it was created by an intelligent Supreme Being.  Try as we might we cannot escape God’s created order.  We ignore God and His purposes for us at our own peril.

Are we witnessing the collapse of Western civilization?